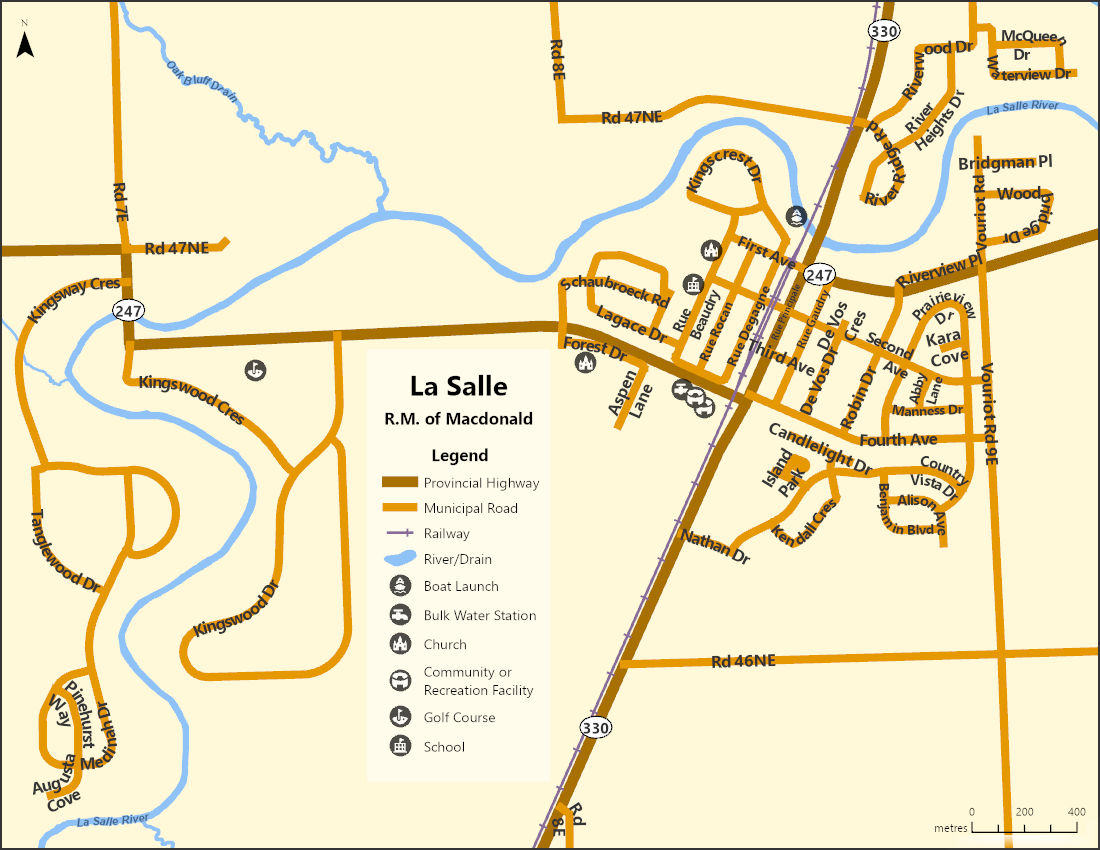 Prior to the CPR laying the rails on or about September 5, 1882, the Roman Catholic Church purchased land to establish the St. Hyacinthe Seminary. This land was on the north shore of the Rivere Sale (La Salle River). This was where the Ferme du College (College Forum) began, on sections 24-25-8-1-E. It was not until 1897 that Msgr. Tache wrote to the Superior of St. -Hyacinthe Seminar in Quebec requesting someone to oversee the college. A young priest, Father Charles Beaudry, answered the call. He decided to move the struggling seminary closer to the railroad.

The area was inhabited by English and Metis families who had laid claims to the surrounding lands. The Metis gave the rights to work the land over to the English, but the English community was short-lived as the Roman Catholic Church purchased the land and began to establish the Parish of St. -Hyacinthe of La Salle. In 1891, the municipal council passed Bylaw 144, which formed the St. -Hyacinthe School District. In 1890, a store had also become a post office, and in 1902 a grain elevator was built.

More and more French families came from Quebec to colonize the new parish. In the summer of 1892, the construction of the "Maison Chapelle" began. It would include a chapel, accommodation for a priest, and a class- room.

In 1893, the school moved to Maison Chapelle. During the next decade many families moved east, swelling the population to 271 "souls" by 1905. The La Salle region was known for its rich land suitable for cultivation. Many early farmers began by raising cattle, chickens, and sheep. They soon began plowing the land with ox or horse. However, as the land was broken, many potholes developed due to the flat prairie not having enough drainage. when it rained these settlers discovered that, as today, the wet soil would stick to everything, leading to the soil being described as "gumbo."

In the early 1900s, land was being broken by steam engines, and the adaptation of farming technology has never slowed down. In 1918, a lumber yard was established, and a garage in 1921. In 1924, a farmer's union for the bulk oil was organized by local farmers to obtain lower prices for their needs.

The Knights of Columbus was also organized during this year. An outdoor hockey rink was built in 1925, and in 1930 a Mennonite church was built on Sec. 18-8-2E. By 1946, the community saw the addition of the La Salle Sports Club, and in 1953 the La Salle Caisse Populaire opened for business.

A community paper, The Villager was published in 1977, and in 1984/85 and the Multisports Complex was built.

Today, La Salle is the largest urban centre in the RM of Macdonald. With a population of over 1,400, the community members are active in establishing facilities and infrastructure that will meet the needs of a rapidly growing urban centre.

La Salle Community Centre Inc., the La Salle School Parent Advisory Council, La Salle Nursery School Board, the Knights of Columbus and numerous other local volunteer organizations work together to raise funds for facilities and infrastructure that will meet the needs of the community into the new millennium.

Local businesses also contribute to the progressive and interactive lifestyle of the community. An active main street exists with businesses such as a gas bar, grocery and hardware store, restaurants, dental clinic, medical clinic, pharmacy, insurance agent, custom builders and a financial institution.

Many other local home based businesses and an active agricultural community make the community attractive for both residents and businesses to locate in. With the La Salle River winding through the community, activities can be pursued on a year-round basis.

The community has some of the best recreational facilities in the municipality, including a community hall, curling rink, and baseball diamonds. The community is also home to the very attractive, picturesque and challenging 18-hole grass green Kingswood Golf and Country Club.

Please go to the Community Page and click on Road Restrictions for more details.