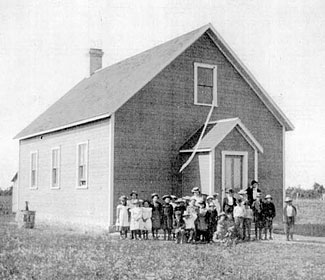 Receiving its name from Canada's first Prime Minister Sir John A. Macdonald, the Rural Municipality of Macdonald came into being as an Act of The Legislative Assembly of Manitoba on May25, 1881. The La Salle River, which winds through the centre of the municipality received its name from early French fur traders such as Alexander Henry, who was a 'bourgeois' with the North West Company in the early I800's The 'Riviere Sale' comes from the French adjective "sale," meaning dirty or foul and was used to describe the bitter, salty, murky waters.

The area was originally inhabited by an alliance of native groups, some of which were the Cree, Assiniboine, Ojibwa and Saulteaux. This alliance provided a unified protection from the much feared Sioux. In the mid-l800's, 'staked claims' were made (many of which were given to Metis people who later sold the land rather than settle on it) and eventually recognized by an Order in Council (1876) under the Manitoba Act.

By 1882, the Canadian Pacific Railroad began to lay tracks through what is now the town of La Salle. In the same year the Municipality began grading an almost direct cross country road between Sanford and Winnipeg to make easy access and shorten the distance of the old trails. In 1889, bridges became a priority and a north- south road was graded, connecting La Salle to the Macdonald road to Winnipeg.

One of the oldest municipalities in Manitoba, the RM of Macdonald's past generations experienced all of nature's wrath and hardships. Not until recently, however, did the municipality fight its hardest battle: the Great Flood of 1997. Home of Winnipeg's savior, the Brunkild Z-dike, Macdonald was one of the many RMs in southern Manitoba evacuated due to the raging waters. During this time, residents saw how each town within the municipality pulled together and supported all the families and businesses affected.

Located southwest of Winnipeg and covering approximately 1,106 square kilometers, the Rural Municipality of Macdonald extends from Fort Whyte, over the Perimeter Highway to the towns of Oak Bluff, La Salle, Domain, Osborne, Brunkild, Sanford, and Starbuck. The municipality has access to major railroads, and by road is accessible by the Perimeter (Oak Bluff), Highway #3 (Sanford, Brunkild), Highway #2 (Starbuck), and Provincial Road 330 (La Salle, Domain, Osborne).

Currently, the RM of Macdonald has a population of 7,162. A recent article in the Winnipeg's Free Press designates the municipality as one of the fastest growing areas in Manitoba.