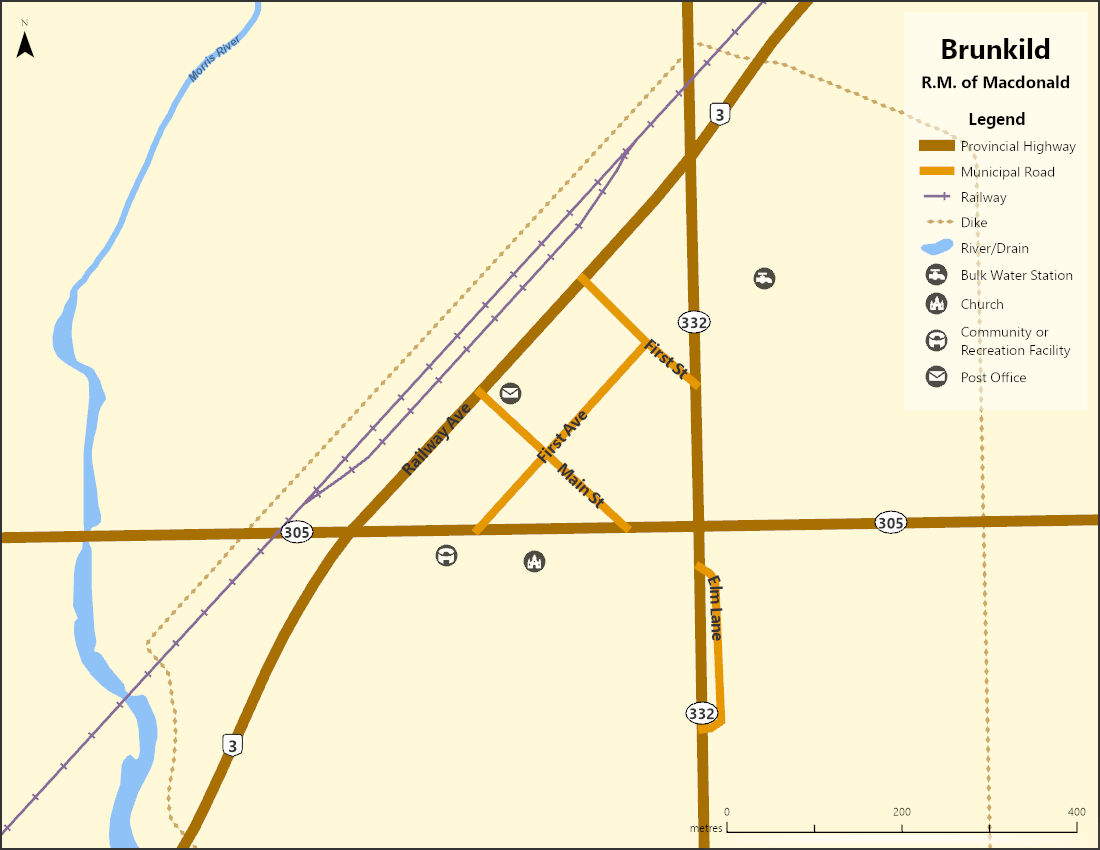 Brunkild is situated 30 miles southwest of Winnipeg on Highway #3. There are at least two explanations for the choice of the name "Brunkild."

One is that the name was derived from Norse mythology about a beautiful golden-haired maiden named Brunhilda - hence the name Brunkild.

The other is that the name of the railroad station on the Wroblewsky farm near the present site of Brunkild was to have been Sperling. The name Wroblewsky in Polish means 'sparrow'. In German, it becomes 'Sperling.' However, the railroad officials got the Section numbers reversed, and the names Sperling, now a neighbouring community and Brunkild were reversed.

A survey of the area was first completed in 1872. There is some question as to which pioneer family actually located in the area first; however, the first permanent Brunkild residents arrived in the early 1890s when the Poersch settlement was established in the area by William Poersch, Sr., who immigrated to Canada from West Prussia (Germany). By 1894, the immigrants he had helped bring to Canada were in a position to start farming on their own. But it was difficult to find dwellings and land.

These pioneers agreed to give Poersch, whose judgement they trusted, $10 to find 160 acres or more of land to be used as a settlement. After conducting a thorough search, Poersch decided to inspect the Boyne Marshes area.

This land, populated at the time mostly by natives and Metis, had already been surveyed and some had been previously bought, some homesteaded and lost, and some were never even seen by its owners. With the advent of the "drainage system," this swamp land over time became the fertile grain land that it is today.

As the settlement grew, the local farmers signed a petition to the Canadian National Railway to build a railway to connect Brunkild and Winnipeg. In 1903, the first construction train came to Brunkild, the same year that Brunkild established a post office and Poersch, at the unanimous wishes of the settlers, was appointed post master for the sum of $15 a year.

In 1897, the first school called the Poersch School was erected, and in 1906, Poersch erected a store and post office with living accommodation. Over time, more businesses were built to serve the farming community. When crops failed, or floods or weather ruined their hopes, the taxes levied had to be paid, and the payments still came due on the machinery Despite these hardships, the community grew.

Today, Brunkild has the same hard-working spirit that emerges when Brunkild area residents, many of them descendents of these early pioneers, are faced with crop failures, floods, or simply the need to work together for a common goal.

Brunkild is a small but vibrant community that boasts a convienience store, a deli and post office, a hotel and restaurant, a farm equipment dealership, a service station, a bulk fuel dealer a farmer-owned grain elevator, a church, a community, crop protection service, and many home based businesses and services.

Known worldwide for its part in the 1997 flood as the home of the Brunkild Z-Dike, the community is also a friendly haven for travelers during Manitoba's famous blizzards.

The Brunkild community sponsors an fall supper and craft sale, and a community Christmas party and dance.

With a growing population of young people, residents are looking forward to a progressive future.

Please go to the Community Page and click on Road Restrictions for more details.