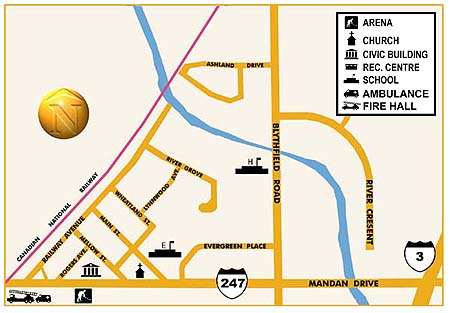 A friendly, growing and busy community committed to development. Land seekers in the early l870s found here- to the south and west of the La Salle River as far as the eye could see- stretches of treeless, unbroken prairie.

Along the north side of the river lay a timber belt from one to three miles in width of splendid oak, ash, elm and poplar This was fine arable land ready for the plough or pasture with fuel, water and shelter at hand.

A predominantly Anglo-Saxon community developed in this district, with the majority of early settlers being either eastern Canadians or recent immigrants from Great Britain. The years 1873 to 1880 saw an influx of settlers, many remaining only for a brief time, the bleakness and monotony of the open prairie presenting too much of a contrast to their pastoral surroundings In England and Ireland.

After the Macdonald Road was built from Winnipeg in 1887 (crossing the river by the present highway bridge) many families settled around the Sanford village Site. In 1891, a former Winnipeg merchant opened a post office in his home by the bridge. He called it Mandan, a name given to the early district by the Indians.

In 1901, the time when the railroad was built, the district was called Ashland, the post office Mandan and the church Blythefield. To counter this confusion, the railway chose to call the station Sanford. The community gradually accepted the new name. Some Americans had arrived before the railway came through; however, with the advent of the railroad, the problem of moving household effects, farm machinery and livestock eased somewhat. More North Dakotans made the journey by this time, portions of the swampland were ploughed.

In 1908 another group of settlers arrived from Ontario. In 1908, one of the settlers described Sanford as he saw: "To me it seemed quite small, consisting of a railway station, a water tank, one general store, a municipal office behind the store, a blacksmith shop, United Grain Growers elevator, a lumber yard and a coal bin, a section house and the manse. The municipal hall which was used for all public meetings, fair activities and dances stood over on the fair grounds with the blacksmith shop a little to the west of it. The school was located in the bush. It consisted of a small one-room building, heated by a large barrel type Stove that burned four foot cordwood sticks..."

By 1919 Sanford had begun to show signs of permanence. New homes were built on Main Street and a boarding house on Railway Avenue. Today, Sanford is a friendly, growing and busy community, located on #3 Highway 20 minutes from Winnipeg.

The La Salle River with its well-treed banks provides shade and shelter as it meanders through the village. Because of its central location in the municipality of Macdonald, the regional schools (K-12) are located here, as well as the Macdonald Emergency Services Department which combines fire and rescue.

There are many services and facilities in Sanford including a church; full service grocery outlet; credit union; liquor, hardware; lumber, gas and farm supply outlets; as well as a post office and numerous skilled tradesmen, to name a few.

Sanford Recreation operates several programs, including hockey skating, baseball, soccer and several others. Many special events are organized, such as hockey and ball tournaments and other community functions. Incorporated into the facility is an indoor arena, hall and excellent ball diamonds. Infrastructure includes sewer, water, natural gas and many newly rebuilt streets.

A desire to locate in an area that offers a safe and high quality lifestyle and recently installed natural gas access has inspired a new 44 lot residential development. Property zoned commercial and industrial is available for future business development.