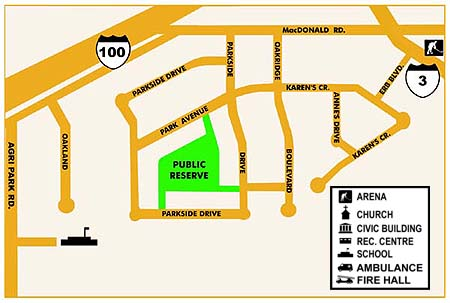 Settlers who came to the Oak Bluff district between 1887-1891 were mainly English, Scottish and a few Irish until 1910 when Americans and Europeans drifted in. Most of the land was sold outright through British real estate agents to prospective pioneers for two to three dollars an acre.

By the time Americans arrived, the price had risen to $35 an acre. The coming of a railroad always preceded a period of development. It brought an influx of "new" settlers to the West as it facilitated the moving of household goods, stock and machinery. Travel and communication were made easier. Grain could be shipped to markets and long hauls with horses and wagon over rough roads were eliminated.

The CPR preceded the CN and passed through the Fort Whyte, Barkham district and La Salle. The nearest stop to Oak Bluff was the flag stop at Fort Whyte or at La Salle. Railway service through the community, however, was first made available October 5, 1901.

With an elevator already in place, the settlers immediately decided to set up a school. Oak Bluff remained as an agricultural community for many years. The railway station was a couple of miles (by road) from the school, and the first post offices were in several locations. The first store was close to the railway.

Gradually, the little village developed around the school where families gathered for meetings and for church services. By 1922 the village had two schools, a store and post office, and a teacherage, but by 1957 there were two teacherages, seven homes and a service station, as well as the school and store.

In 1960, the Metropolitan Winnipeg Act was passed, which give the city control over the fringe areas extending five miles beyond the Perimeter. The following year the city zoned the area around the village as residential, commercial or agricultural, and consequently houses began to spring up along the road frontages, both to the north of No. 3 Highway and across No. 3 Highway west of the school. In 1975, 25 acres west of No. 3 Highway and across from the school became the site of a housing development.

Thirty-three lots were formed and two acres reserved for a recreation park. Due to this development, the population increased from an estimated 12 persons in 1922, to 25 in 1957, and 34 in 1976. It jumped to 134 in 1981 and to 165 in 1984. By 1984, three large business expansion projects were added in the commercial zone: a farm equipment supply, a large service station and restaurant, and a garage and automobile dealership. Residents soon enjoyed the benefits of having a large recreation complex within the village.

In the past several years, the population of Oak Bluff has increased significantly due to the development of Oak Bluff West. Today, the community's quiet, friendly nature, proximity to the city quality of education and reduced tax base have all added to the migration of property owners and businesses to the rural area.

Oak Bluff has been a predominantly agricultural /agri-based business community with designated areas of the community zoned for commercial, light industrial and agribusiness. This has provided for new business opportunities in the area. The access to major highways in Oak Bluff has been an added incentive for business to take a short jaunt out of the city.

A recreation centre with artificial ice and a hall for community events are available to rent for weddings, socials and other fundraising events. The recreation centre added a 4-plex of baseball diamonds and a soccer pitch to the school property. The Oak Bluff Community School (part of the Red River School Division) is also a hub for community activity. The school also houses the Oak Bluff Community School Technology Centre. In this centre adult and student learners come to learn and enhance their skills and ability. The community of Oak Bluff continues to offer families and businesses the warmth of rural living and the convenience of proximity to Winnipeg.